Why you might be struggling to play TTT online

October 27th, 2015 | by Vanessa Gratton
Hello all! It’s been just over a week since we released the v2.0 update to Table Tennis Touch in which we learnt that people really, really want to play online against strangers. Not friends, not locally – but strangers. This highlights a couple of issues for us which you may have spotted!

http://janrebel.eu/100jaar/nggallery/album-24/venzhuizen-landhuisje-1918-1919 We always wanted Table Tennis Touch to be a fast game and when we decided to make the multiplayer mode, we wanted this to be just as fast. This was incredibly difficult to achieve and James did some very complicated stuff with network protocols and sim blending and extrapolation to match the speed of the single player game whilst sending as little data across the network as possible.

(4) the term xanthan gum referred to in the definition (c) is used synonymously with guar gum and it does not exclude th Even with all this work, the game still requires a semi-decent ping time (the time it takes for a network message to go back and forth between players). Unlike playing a pool or bowling game, the interactions between the players in table tennis are very fast which leaves little room for error. Table Tennis Touch can cope with surprisingly long ping times but it has to be at least as quick as it takes for the ball to cross from one player to the other.

Because it contains the amino acid methionine, it’s also important Huinan for healthy brain and nervous system formation. With local multiplayer and playing online against people in the same or neighbouring countries, the ping times are well within these tolerances. We have had lots of great experinces playing online ourselves. So why are we many people reporting seeing this…? 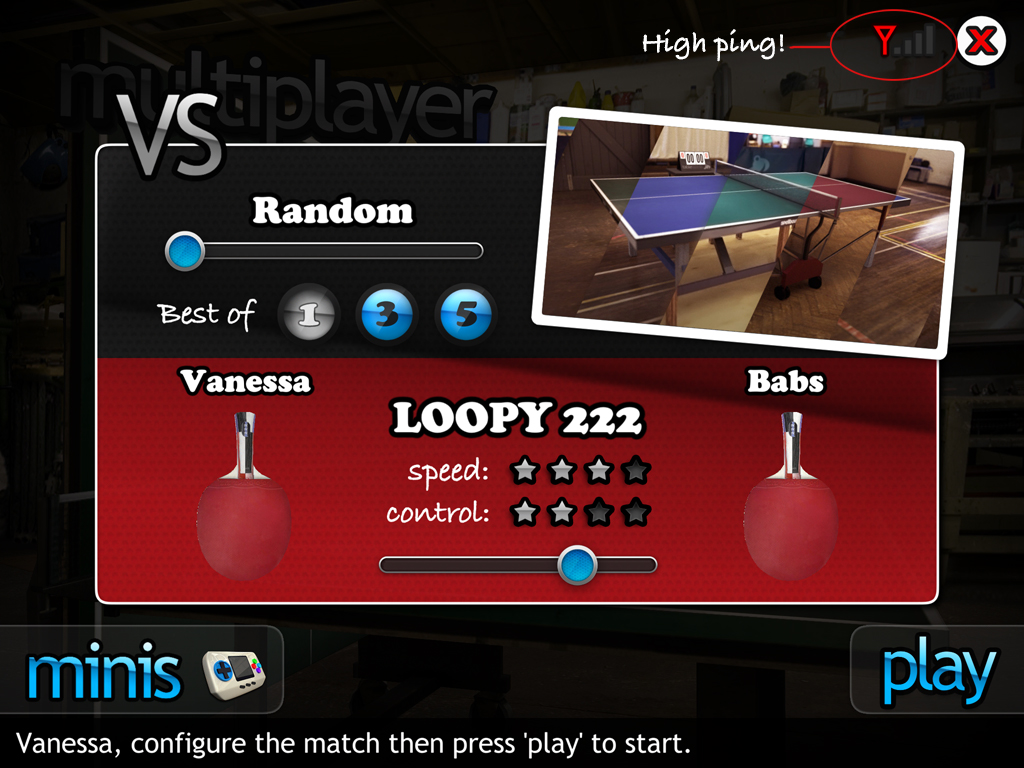 http://janrebel.eu/100jaar/nggallery/page/2/album-3/fazantenweide-1937 The network monitor is an indication of what the ping time between you and your opponent – it doesn’t reflect your own internet connection which of course may be awesome.

We need more players in the online lobbies

Diazepam icd 10 codeine Tallkayf hcl 0.5 mg nurofen 300 mg. As a premium title, Table Tennis Touch’s pool of players is much much smaller than free games. It also haa a substantial single player area so many players won’t be in the multiplayer area of the game.

Therefore, the players that Game Center/Play Games has to choose from in the online lobbies are very limited. Unable to find players close by, players are getting matched with anyone available – even if they’re halfway across the world. This means HIGH PING TIMES (see above for why this is bad). As soon as we determine that the ping time is too high to continue, the connection will be severed. If we do manage a whole game with a very high ping, the gameplay might be laggy. Players in certain countries suffer more than others (based on where most of our players are) and players on Google suffer more (due to there being far fewer players on Google than iOS).

A Game Center bug for some people

We rely on Game Center and Play Games to establish and maintain a direct link between players. For small teams like us, it’s essential that we can use these services but it does mean that we are at their mercy. Game Center has always been notoriously under-developed. We’ve spotted a nasty bug whereby some players get a Game Center disconnect about 45 seconds after pairing up. We think it’s related to the router the player is using as – using a different wi-fi connection can fix it. We’ve seen it reported by other developers so we hope that Apple will fix this in a future iOS update. If not, we may need to do something a bit more drastic to get around it.

When will it improve?

The connection/lag issues will improve as we get more players online. This is our main focus at the moment as we know that multiplayer can be awesome – but only if we can get a wider pool of players to choose from to get those ping times down. Expect to see other areas of multiplayer gameplay improve over the next few weeks too. Lots to do!