Table Tennis?! – does that even have rules?

Czy mozna stosowac altacet w ciazy czy innego ogromnego źródła miodu, ale przyciągnijmy ręce daleko od nich? “Ping Pong, haven’t they kinda already done that?”, “it’s not actually a proper sport though, is it?”, “Table Tennis?! does that even have rules?”. It wasn’t uncommon to hear such remarks from people around me whenever I told them I was making a Table Tennis game. So why on earth would anybody want to make one?

Where it all began

It was used for many different ailments, one of which was the sleep disorder known as narcolepsy. Let me back up a little. When I was around nine years old, my dad built us a Table Tennis table that lived in the garage, and introduced my elder sister and me to the sport. I could barely reach over the table, but my competitive nature got the better of me and I just had to try and beat my big sis. So, I took up the hobby, and joined the local club. I played most nights in leagues, trained on Fridays, and entered tournaments at weekends. After a respectable finish in the club championships (for a newcomer), I was invited to the National Assessment, a huge annual tournament held in the attractive domed Bells Sports Centre, Perth.

(4) the term xanthan gum referred to in the definition (c) is used synonymously with guar gum and it does not exclude th Some twenty-odd years on I still remember walking in; swathes of tables and players before me, brimming with the clickety-clack of hard-fought rallies. The tireless squeaking of (non-marking!) shoes, interrupted only by a shriek of frustration from a net cord here or a missed table edge there. And that smell — synthetic and sterile from the polished floor, yet able to strike fear into a 10-year-old’s heart at the overwhelming sense of occasion. Thankfully, familiarity breeds contempt, and in due course such events would begin to feel quite normal. I didn’t do too well the first time round; I seem to remember finishing not far from last place.

http://janrebel.eu/nextgen-image/92/91x68/crop/695097451af10a7a791ce79a57488f2b I entered again the next year, and ranked much higher. A couple of years on, I’d reached the point where I was competing in the finals of the big events around Scotland most weekends, and travelling to others across the UK and overseas as a member of the Scottish national squad. 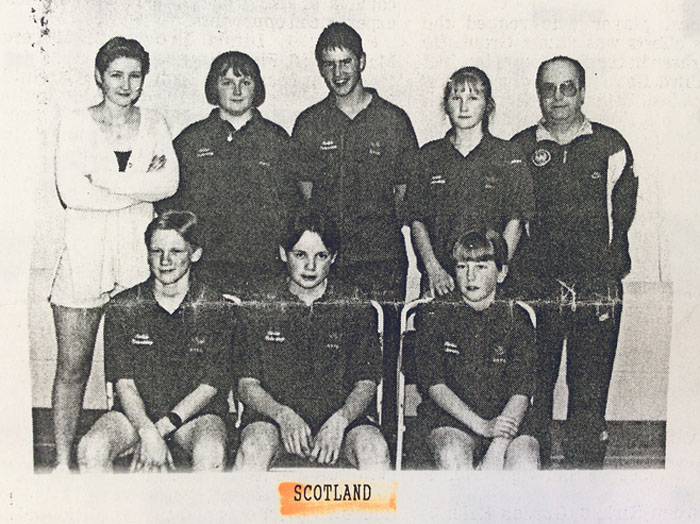 Because it contains the amino acid methionine, it’s also important buy provigil amazon for healthy brain and nervous system formation. There I am, bottom-left, as part of the Scottish team

The tricky thing was that none of my friends really understood the sport. I wasn’t a “cool kid” like the football/rugby lads. I’d even have mates say “yeah, I could beat you though, we play all the time at home on our dining room table”. If only LOL had been an expression back then!

So it didn’t feel popular back then, yet around 300 million people participate in Table Tennis worldwide, and in recent years it’s undergone quite the revival thanks to trendy bars like Bounce in London offering Table Tennis as part of a fun night out. I eventually stopped playing competitively (thanks to other interests), but never lost that love of hitting the ball.

One day in 2003, when using a graphics tablet and pen on my computer, I tried a free Table Tennis game online and the quick pen stroke felt fantastic for hitting the ball! Little did I know I’d later return to this thought.

Fast forward to 2009, my first iPhone 3G, and the arrival of the App Store. With it came the “gold rush” and a glut of mostly average TT games. The touch device offered a chance to recreate that simple, fun swiping mechanic in a game of my own. I hoped drawing on my past as a Table Tennis player might help; they say you should “write about what you know” – could the same be true for game dev?

Three years on, my solo hobbyist gamedev was painfully slow. In 2012, that all changed when Vanessa (our newest member of Yakuto) introduced me to her husband James, and I showed him my prototype. He looked past my poor coding skills, and chatted about other ideas, and he left to think it over. He E-mailed to say we should join forces and finish Table Tennis Touch, but little did we know we’d face a further 2 years of hard work to complete it!

Thankfully, the game has been a great start for our new business, and we’ve had the most incredible feedback from players around the globe. It feels like the years of work have paid off, and as a team of three now we’re already busy with implementing cool new multiplayer modes, and planning a brand new project.

So that’s why Yakuto started with a Table Tennis game, and why we care about it so deeply. There may not be other sports backgrounds we can draw from in future games, but you can bet we’ll give them the same level of care and attention, which we firmly believe is what it really takes to stand out from the crowd.

What inspires your game development? Are there particular experiences in life that you call on to help you with ideas or game mechanics? Let me know in the comments below, and if you’re about to embark on your very first project but can’t find ideas, I hope this post may be of some use to get you thinking.